Borough of Alburtis Police Department
Home"THE POLICEMAN"2017 - Year in Review2018 - Year in ReviewAbout UsAlburtis Town WatchApparatusCPSC RecallsCall VolumeChild Safety SeatsContact UsCost of CrimeCrime PreventionERGEvents CalendarFilesFirst Aid & CPR ClassesGuestbookGun SafetyHow Do I?LinksMembersNational Take Back DayNewsNewslettersPicturesSafety AppsSocial Media PostsStoreVideo
News headlines
National Night Out 2021
On Tuesday August 3, 2021 from 12pm to 9pm, the Alburtis Police Department held its 14th Annual National Night Out Event at the Alburtis Area Community Center's Pool. For the first time this even...
➜
Part Time Police Officers Leave in 2021
The Borough of Alburtis Police Department was sorry to see three part-time police officers leave in 2021. Ryan Geist resigned in February to take a full time position as a police officer out of the c...
➜
Trick-or-Treat
The Alburtis Police Department once again provided glowsticks to each student at Alburtis Elementary School. We would like to thank the teachers for handing them out and helping to keep our kids safe...
➜
Hawaiian Luau and National Night Out Cancelled for 2020
The annual Hawaiian Luau and the National Night Out event for 2020 have been officially cancelled. We look forward to 2021, as we hope for bigger and better events.
2017 - Year in Review

The department saw the departure of Senior Patrol Officer Cory Fluck, Officer Alexander Smith, and Officer Joseph Britt for other job opportunities and the retirement of Sergeant Jay Ruff.  Officers Troy Leonard and Broc Termini were hired in December 2017 to help fill the void.

The Alburtis Police Officers' Association conducted contract negotiations with the Borough of Alburtis beginning in June 2017.  Neither party were able to compromise on a contract and the contract went to arbitration in October 2017.  The arbitrators' decision should be announced in early 2018.

The police department conducted a First Responder/Military Appreciation Day, a Hawaiian Luau, and the National Night Out Event at the Alburtis Area Community Center's Pool as part of their continued summer Crime Prevention Program.  For safety the police department distributed over 650 glowsticks to students at the Alburtis Elementary School and various trick-or-treaters for Halloween.

The Borough of Alburtis Police Department looks forward to serving the community in 2018 and hopes everyone has a safe and healthy year.

Ken Osmond (the actor who played Eddie Haskell in Leave it the Beaver) became a Los Angeles Police Officer after the show ended.  He ended up being shot in the line of duty and survived because of his bullet proof vest.  He is now retired. 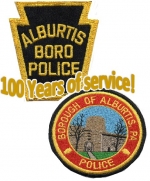 This site has been viewed 66,715 times.
News
Events
Pictures
Apparatus
Maintained by the members and staff of Borough of Alburtis Police Department. Designated trademarks and brands are the property of their respective owners. Copyright © 2006-2021. YourFirstDue Inc. All Rights Reserved. Content on this web site is supplied by Borough of Alburtis Police Department. YourFirstDue Inc. cannot be held responsible or liable for any content, text, pictures, or any other media found on this web site.
Management login
Powered by